Edit
This article is a stub. You can help Mr. Boom's Firework Factory Wiki by expanding it.

Mr. Boom is the boss of the player and a non-playable character in Mr. Boom's Firework Factory. He introduces each level, giving advice and guiding the player. He also appears during tutorials. 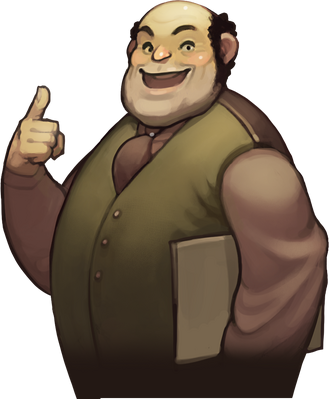 Eric Boom made his living in the fireworks trade, buying and selling fireworks from around the world before establishing a factory of his own. He is bullish, authoritative and brash. He was born in one of the southern states of the USA around 50 years ago, but his exact age and place of birth are never discussed with his employees. His time spent around explosives has made him partially deaf in his left ear, giving him the tendancy to occaisionally shout when he speaks.

He has no children or family to speak of, being an only child of a family who had to scrimp for every cent they had when he was a child.

Mr Boom is a task-master who expects perfection, and an uncompromising attitude to meeting very short deadlines. Health and safety are not even at the back of his mind, or even anywhere near his peripheral vision, as these compromise his ability to manufacture and deliver. He seeks out and puts his trust into any employee who shares this same work ethic.

In recent times the firework industry isn't what it was in Eric's home town. He has had to turn to more illicit trade to survive. Behind the scenes, his firework factory is manufacturing enough armaments to equip a small country, which he exports to warring nations, or anyone with the money to keep his business afloat, using his legitimate business interests and his explosives export licenses. Initially, he describes this part of his business to the player as "Research and Development" into better explosives, or "Import and Export" of high grade fireworks to "foreign markets". This sinister side to Eric reveals a darker and more callous nature, someone who has no qualms about indirectly hurting others for a profit.